In its interim report for the period January to September 2005 published today the NIBE Group continues to show strong growth:

“As reported in August we have set aside a reserve of SEK 70 million during the third quarter to cover restructuring costs within the NIBE Element business area. The restructuring process is already taking place and we are convinced that this, together with intensified efforts in product development and marketing, will lead to satisfactory profit levels for NIBE Element within the next couple of years.

“Prospects continue to look bright for NIBE Heating and NIBE Stoves with positive trends in growth and profits. Both business areas have successfully launched new products in the form of heat pumps and stoves, and both continue their strong expansion outside Sweden.

“All in all, this encourages us to look to the future with undiminished optimism, not least against the background of the international opportunities we see for the Group. The subsidies that have been proposed to stimulate the switch from direct electricity and oil-fired heating will have a highly positive impact on demand for ground-source heat pumps over the next five years. However, there is a question mark over the effect that the promise of these subsidies will have on demand during the remaining few weeks of the year, which historically have tended to produce some of the best sales figures for NIBE Heating. As a result it is difficult to predict with any accuracy NIBE Heating’s earnings for the rest of year.

“To summarise, we believe that the Group’s result for the year as a whole will be as good as if not better than that for 2004, after adjustments to take account of the capital gain made in conjunction with the sale of our shares in Jøtul. It should also be remembered, however, that the figures for 2005 will be affected by the fact that SEK 70 million have been earmarked for restructuring work in the NIBE Element business area,” Gerteric Lindquist concludes. 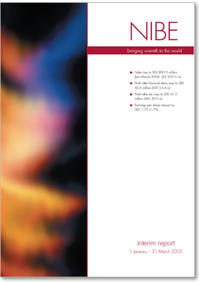