Corporate governance in NIBE Industrier AB (NIBE) is performed by the Annual General Meeting, the Board of Directors and the Managing Director/CEO in accordance with the Swedish Companies Act (Swedish Code of Statutes 2005:551), the company’s Articles of Association, the Swedish Annual Accounts Act (1995:1554), the listing agreement with the NASDAQ OMX Stock Exchange in Stockholm, and the Swedish Code of Corporate Governance (the Code).

NIBE has its registered offices in Markaryd, Sweden, and the company’s shares have been listed on the NASDAQ OMX Stockholm Exchange since 1997, with a secondary listing on the SIX Swiss Exchange since August 2011. On 31 December 2012 NIBE had 16,884 registered shareholders, excluding previous owners of the Schulthess Group AG who have become shareholders in NIBE. As the Swiss authorities do not report any details relating to individual shareholders in Switzerland to NIBE, it is not possible to determine the total number of shareholders. The ten largest shareholders comprise the constellation of ‘current and former board members and senior executives’ with a total of 24% of the capital and 48% of voting rights, followed by Melker Schörling who holds 11% of the capital and 20% of the voting rights, and eight institutional investors with a total of 21% of capital and 10% of voting rights, one of whom represents the previous owners of the Schulthess Group AG. Together these ten constellations of investors hold a total of 56% of the capital in the company and 78% of the votes.

The 2012 AGM gave the Board of Directors a mandate to issue new class B shares, on one or more occasions and without regard to the shareholders’ preferential rights, to be used as payment for the company’s acquisition of other companies or businesses. This mandate is valid until the 2013 AGM and is restricted to a maximum of 10% of the number of class B shares issued at the time of the AGM. 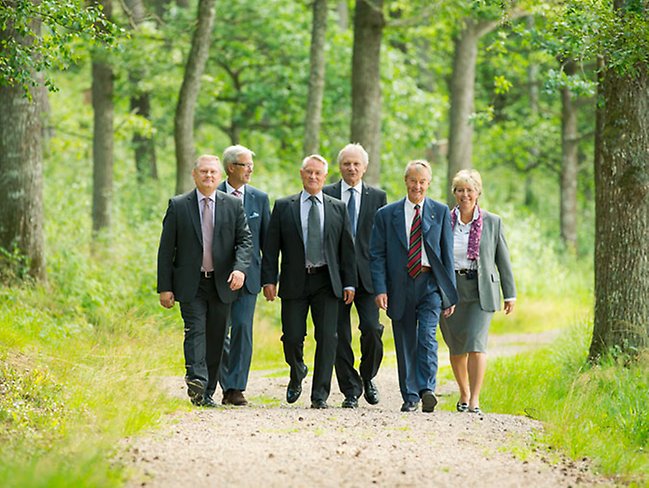 The NIBE Board of Directors consists of six members, elected by the AGM. Directors of the company and the Chairman of the Board are elected annually by the AGM to serve for the period until the next AGM. Company employees participate in board meetings as required to submit reports or to contribute expert knowledge in individual matters.

The current Board of Directors comprises Arvid Gierow (Chair), Georg Brunstam, Eva-Lotta Kraft, Hans Linnarson, Anders Pålsson and Gerteric Lindquist (CEO of the NIBE Group). With the exception of the CEO, none of the directors of the company is employed by the company or has any operational responsibilities in the company.

The Board of Directors oversees the work of the MD/CEO and is responsible for ensuring that the organisation, management and administrative guidelines for the company’s funds are suitable for the purpose. The Board is also responsible for developing and following up the company’s strategies through plans and objectives, decisions on acquisitions, major investments, appointments to managerial positions and the continual supervision of operations during the year. In addition, the Board sets the budget and is responsible for the annual accounts. 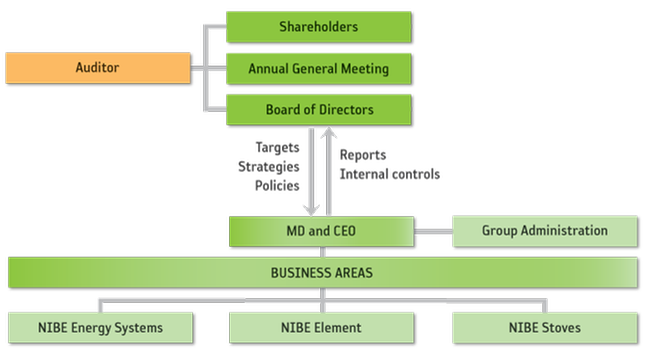 The work of the Board of Directors

During 2012 the Board of Directors held 14 meetings, of which seven were traditional round-table meetings, four were telephone conferences and three were per capsulam meetings, where information was shared by circulating the papers among the board members. All meetings were minuted.

Attendance at board meetings was good with full attendance for all the round-table meetings.

The agenda includes a number of standing items, which are considered at every meeting

Every ordinary board meeting focuses on one principal topic of discussion, as outlined below:

In addition, the Board of Directors receives a written report every month on the company’s financial key figures and position. The MD/CEO is also in continual contact with the Chairman of the Board.

The work of the Board of Directors is evaluated once a year.

NIBE’s auditors have been elected at the AGM to serve for a period of one year.

Mazars SET Revisionsbyrå AB was re-elected for a period of one year at the AGM in 2012 with Bengt Ekenberg elected as the senior auditor.

The senior auditor has continual access to the approved minutes of company board meetings and the monthly reports that the Board receives.

The company’s senior auditor reports his observations from the audit and his assessment of the company’s internal controls to the Board as a whole.

Over and above normal auditing duties, Mazars SET Revisionsbyrå assists in particular with due diligence reviews in conjunction with corporate acquisitions and with accounting consultations. Information on the remuneration of auditors is given in Note 5 to the annual accounts.

The CEO, who is also appointed by the Board of Directors as Managing Director of the parent company, exercises day-to-day control of the Group, and the three directors of the Group’s business areas report to him.

The CEO leads operations in accordance with the instructions adopted by the Board in respect of the division of work between the Board and the MD/CEO. The work of the MD/CEO and of senior management is evaluated annually.

The NIBE Board deals with all matters of significance. Issues such as the composition of the Board and directors’ fees are dealt with once a year prior to the AGM, when the Chairman of the Board contacts major shareholders personally.

The company’s auditor makes his report to the Board as a whole.

The company does not have a Nomination Committee (item 2.1 in the Code), a Remuneration Committee (item 9.1 in the Code) or an Audit Committee (item 7.3 in the Code). NIBE does not comply with the Code in respect of nominations because of the clear ownership structure with two principal shareholder constellations, which together control 70% of the company’s votes, and which also enjoy mutually cordial relations. The Board of Directors is not too large to carry out the audit and remuneration tasks in a manner consistent with the Swedish Companies Act and the Code.

The 2012 AGM resolved that the fees to the Board of Directors and the fees to the auditors should be paid in accordance with approved accounts. At the same time, policies for the remuneration of the MD/CEO and other key management personnel were detailed and approved. Further information about the principles that apply can be found in Note 6 to the annual accounts.

Directors who are employed in the Group.

Salary and other remuneration paid to the MD/CEO in 2012 amounted to SEK 3,403,000. The MD/CEO also has free use of a car. Salaries paid to four other senior management executives totalled SEK 9,543,000.These senior executives also enjoy free use of company cars. A financial contribution towards removal costs is available to newly recruited senior executives. 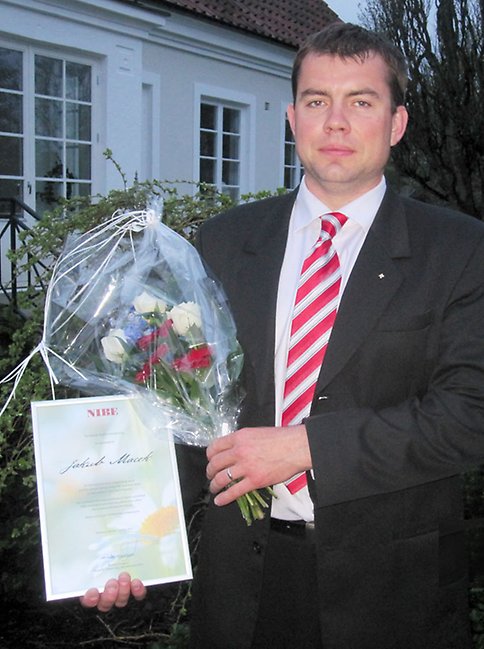 In 2012 it was Jacob Macek from NIBE’s Czech subsidiary, DZD, who received the Bengt Hjelm Scholarship. Since Bengt Hjelm retired as Chairman of the Board of NIBE Industrier in 2004, the award has been presented each year to a young person from one of the many NIBE companies worldwide, who has served as a good example of the commitment and faith in the future that the company stands for.

The MD/CEO has an individual pension insurance arrangement that corresponds to ITP (supplementary pensions for salaried employees). For 2012, the premium corresponded to 19% of salary up to 30 so-called “income base amounts” (a statistical amount used in Sweden for calculating benefits, etc.). For salary to the MD/CEO paid in excess of this, a premium payment of 30% was made that corresponds to the defined-contribution ITP plan, section 1. Other senior executives in the Group have retirement benefits that correspond to the ITP plan for that portion of their salary up to 30 income base amounts. For salary in excess of this, a premium of 30% is made in accordance with the defined-contribution ITP plan, section 1. An exception is made in the case of the director of one of the business areas, who, in his capacity as Managing Director, has an individual pension arrangement with premiums that correspond to those of other senior executives.

An incentive programme applies to certain key members of staff/senior executives, according to which they are paid a variable bonus (equivalent to a maximum of three months’ salary) if set targets are met. The possibility also exists to receive an additional month’s salary on condition that this additional payment plus another monthly salary paid as a variable bonus or part of a variable bonus is used to purchase NIBE shares. A further condition for entitlement to receive this additional month’s remuneration is that the shares thus purchased are retained for at least three years. Under normal circumstances shares acquired in this way shall be purchased on one occasion each year in February/March and the purchase shall be subject to the relevant insider trading regulations. No incentive programme is offered to the MD/CEO. Certain key individuals in the foreign companies acquired during the year have incentive programmes that, in certain respects, deviate from the principles for remuneration that are otherwise applied in the NIBE Group. Further information about the principles that apply for senior executives can be found in Note 6 to the annual accounts.

Communication with the stock market

The ambition is to maintain a high standard of financial information issued by the Group. Such information must be accurate and transparent in order to create long-term confidence in the company.

Earnings and a summary of the Group’s financial position are presented quarterly and, like the annual report, are issued in printed form to all shareholders who so wish. All takeovers and other information that may have an effect on the company’s share price are announced via press releases. Full financial information relating to NIBE Industrier is available via the website www.nibe.com. Press releases and reports are posted there at the same time as they are made public.

During the course of the year there have been a number of meetings with Swedish and foreign financial analysts, the media and Aktiespararna, the Swedish Shareholders’ Association.

Internal controls of financial reporting in 2012

According to the Swedish Companies Act and the Code, the Board of Directors is responsible for internal controls. This report on internal controls and risk management with regard to financial reporting complies with the requirements in Chapter 6, section 6 of the Annual Accounts Act.

Internal controls were an important component of corporate governance even before the new code was introduced.

NIBE is characterised by simplicity in its legal and operational structure, transparency in its organisation, clear divisions of responsibility, and an efficient management and control system.

Consolidated financial reports containing comprehensive analyses and comments are drawn up each quarter for the Group and its business areas. Results are also monitored every month.

There are finance functions and controllers with responsibility for accounting, reporting and the analysis of financial trends at Group level, business area level and major unit level.

In addition to the statutory audits of the annual report and statutory audits of the parent and all subsidiaries, the auditors carry out an annual review of how the companies are organised, of existing routines and of compliance with the instructions issued, based on guidelines drawn up by corporate management and approved by the Board of Directors. A summary of internal control procedures is presented each year as part of the board meeting that deals with the year-end accounts.

The Board also has the option of requesting a special audit of a selected business or operations during the year if this is deemed necessary.

It is our opinion that this review increases insight and awareness, provides explicit instructions and proposes a clear organisation in respect of internal controls. It is therefore the opinion of the Board that, because of the implementation of this review, there is no need for any separate internal control (item 7.4 in the Code).