“During the year, general demand varied widely for natural reasons. There are also differences in demand between the various market segments, where those with clear sustainability characteristics, such as heat pumps, continued to perform well. It is also gratifying that demand from the semiconductor industry has shown good growth and that both the domestic appliances sector and the automotive industry recovered after mid-year. Demand for stoves, which are considered durable goods, regained strength after a weak period in the spring. After nine months, we can also state with great satisfaction that our local management teams and employees were able to summon all their strength and counteract the effects of the uneven demand caused by Covid-19. This has resulted in continued good performance so far this year,” said Gerteric Lindquist, Managing Director and CEO of NIBE.

"With our company philosophy and our strong product range, we are well positioned in a market that is increasingly feeling the influences of the transition to a more sustainable and digitalised society. The completed acquisitions as well as our focus on product development should further strengthen our position. Our internal work on efficiency along with our rigorous cost control also continue with unchanged intensity. Although the external situation is extremely difficult to assess, our view is that our business remains robust, thanks to our geographical spread, stable profitability and good financial preparedness.”

“In light of this, the Board has proposed reintroducing the original dividend proposal for the 2019 financial year,” said Lindquist.

Due to the outbreak of COVID-19, we would particularly like to direct attention to the following paragraph on page 3 of the interim report:
“ The outbreak of Covid-19 is another such uncertainty that has caused widespread change for most of the world’s communities and companies, including our own. While we were affected by the outbreak relatively little in Q1, we were affected to a greater extent in Q2, but the situation remained manageable nevertheless. Q3 saw a marked improvement in both sales and profit. At the beginning of the second half of the year, most countries tried to return to a more normal state, but a second wave of the virus has forced many countries to reintroduce strict rules in an attempt to prevent the spread of infection. However, the light at the end of the tunnel is that one or more vaccines seem to be relatively close to being available for use on a large scale. As is our way, we will continue to operate our businesses as normally as possible while exercising the greatest possible caution and being prepared for what the future may hold. This, and the fact that our products are largely both necessary and sustainable, permits us to be cautiously positive about our performance in the last quarter of the year and thus the year as a whole, despite everything.”

A teleconference (in English) will be held for press and analysts at 11.00 (CET) today with CEO Gerteric Lindquist and CFO Hans Backman. To attend the conference, ring +46 8 566 427 06.
You must be registered at www.nibe.com to view the images for the presentation.

NIBE Industrier AB (publ) is required to disclose the information in this press release under the EU’s Market Abuse Regulation and the Swedish Securities Market Act. This information was submitted by the contact persons above for publication on 18 November 2020 at 08.00 CET. 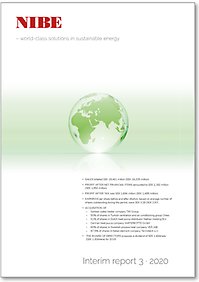