Stable NIBE sees signs of improvement in the economy

NIBE has released the following figures in today’s interim report for the period January–September:

“After several quarters during which demand has remained relatively low, we now feel that we have begun to see some signs of an improvement in the state of the economy during the autumn, and this is also reflected in our sales and earnings,” says Gerteric Lindquist, CEO of the NIBE Group.

“There are, for example, positive signals coming out of the North American market for NIBE Element, from Sweden and Germany for the heat pumps produced by NIBE Energy Systems and from the UK for NIBE Stoves.”

“This, coupled with the fact that we have continued to maintain a high frequency of product launches and a strong market presence throughout what have been rather challenging times, fills us with confidence for the future.”

“It is also our opinion that the improvement we have seen during the autumn will be sustained throughout the year,”Gerteric Lindquist concludes. 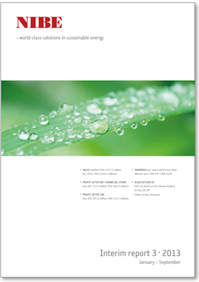