First quarter weaker than last year, as anticipated – forecast for year as a whole remains positive for NIBE

In today’s interim report for the period January–March 2008, NIBE reports a downturn in both sales and profits.

“As anticipated, this year has seen a weaker start in terms of both sales and profits than last year’s very strong first-quarter result,” says Gerteric Lindquist, CEO of NIBE Industrier.

“The downturn in the market that we observed in the second half of last year has continued to prevail during the first quarter of 2008. However, there are two sides to the picture: while there is a decline in demand for consumer products, demand remains good for the products we supply to our industrial users.

“The deterioration in operating profit is chiefly attributable to lower sales volumes and a big difference in stock-building between the first quarter this year and the first quarter of 2007, which has resulted in a lower absorption of fixed costs.

“Experience from last year’s over-optimistic stock-building activities has taught us that this year we must make greater efforts to cope with what traditionally is a much greater level of demand during the second half of the year by temporarily raising our production capacity. This change in our pattern of production means that there will be a shift in profits from the first to the second half of the year.

“We are continuing to win new shares of the market in all three business areas, and we have made three more strategically important acquisitions of companies with good profitability in Austria, Denmark and Russia.

“Our faith in the future remains firm and our focus long-term. This is illustrated, for example, by our new, state-of-the-art wood-stove production facility that is currently being brought online and that will pave the way for our continued expansion and an improvement in productivity.

“Our view of the prospects for 2008 remains cautiously positive at the same time as we recognise that we are, of course, dependent on developments in the world around us,” concludes Gerteric Lindquist. 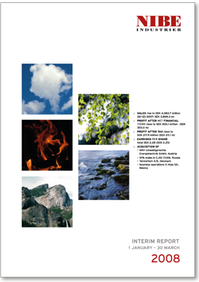