“In the main, developments as a whole remain positive on most of NIBE Element’s markets, but overall demand for heat-pumps has slackened in both Germany and Sweden. In addition, there has been a sharp downturn in the market for wood-burning stoves in Germany and Denmark. This has resulted in lower sales than we anticipated.

Together with steep increases in material prices that we have been unable to compensate for, this led us to issue a profits warning on 20 September 2007, forecasting lower earnings this year than last,” says Gerteric Lindquist, CEO of NIBE Industrier.

“We also announced a cost-cutting programme to reduce the fixed cost base at the Markaryd unit by SEK 50 million in 2008 compared to today’s levels. This programme is now under way and involves cut-backs of around 60 jobs and the reduction of other fixed costs. “Within NIBE Element work is now drawing to a close on the final phase of the restructuring programme, namely the transfer of some 30 full-time jobs from Sweden to units in Eastern Europe and Asia.

“While it is both rare and regrettable that profits should fall – and, of course, distressing to have to make skilled and devoted workers redundant – we nevertheless feel that we can face the future with great confidence.

Our marketing and product development work is continuing with undiminished vigour, and we are convinced that our products are right for today’s market, where energy savings and environmental awareness are acquiring ever greater importance.

“For 2007 as a whole we believe that the increase in sales for the NIBE Group will amount to around 10%, while the pre-tax profit is expected to be approximately 10% less than in 2006.

“The weakening trend that we have now noted has not changed our view of the NIBE Group’s future opportunities for growth. NIBE’s long-term objectives remain unchanged. This means, for example, that by 2011 at the latest we will have increased annual sales to SEK 10 billion while still maintaining good profitability,” says Gerteric Lindquist. 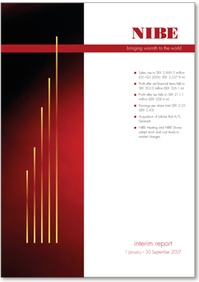