Good results across the board for NIBE Industrier

“We have seen very good results across the board during the first six months of the year,” says Gerteric Lindquist, CEO of NIBE Industrier. “All three business areas are continuing to capture new shares of the market, and organic growth is up around 20 percent.

“NIBE Heating’s ongoing focus on active and aggressive marketing has led to increased growth in sales both here at home in Sweden and abroad. Heat pump sales have shown the greatest increase in volumes.

“The restructuring programme devised for NIBE Element is developing according to plan. We are already reaping results in the form of improved earnings and a bigger market share.

“NIBE Stoves continues to build on the successful foundation it has created. Growth is strong and the business area is reinforcing its position in markets outside Sweden with acquisitions and new establishments. Work has now also begun on the new production plant in Markaryd.

“The way things have turned out over the first six months of the year fills us with even more confidence that NIBE will continue to develop in a positive direction during the remainder of 2006,” concludes Gerteric Lindquist. 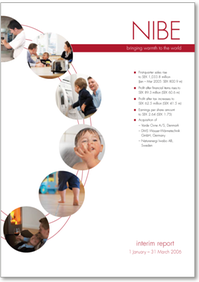