2005 – another strong year for Heating and Stoves, but a tough market for NIBE Element.

The summary of the NIBE Group’s annual report for 2005 is published today.

“In terms of volumes 2005 was yet another strong year for all three of the NIBE Group’s business areas,” says Gerteric Lindquist, CEO for NIBE Industrier. “NIBE Heating and NIBE Stoves divisions reported operating margins of 13% and 21% respectively, but it has been a difficult year for NIBE Element. As a result we have taken what is a unique action for NIBE and set up a restructuring reserve of SEK 70 million to fund an overhaul of the business area’s production of elements for high-volume customers.

“In addition, a Swedish government announcement had the effect of temporarily postponing sales of ground-source and geothermal heat pumps during the last two months of the year. Forthcoming subsidies for the conversion of oil-heated properties and those heated by direct electricity were announced in November, but were not made available until the start of 2006.

“There is also much to be optimistic about. For example, it is gratifying to see that our investments in product development and marketing are beginning to bear fruit. In 2005 NIBE Heating introduced a new generation of high-performance ground-source heat pumps that offer the best heat savings on the market. And in January 2006 it was time for a new world first – a frequency controlled ground-source/geothermal heat pump. Parallel with these developments, NIBE Stoves successfully launched a brand new series of wood-burning stoves under the Handöl name in 2005.

“The new year has also started well. It is our opinion that demand will continue to remain good throughout the whole of 2006 and we aim to increase our share of the market in all three business areas. We remain confident in our ability to achieve our long-term goal of sales of SEK 5 billion by the end of 2007,” concludes Gerteric Lindquist. 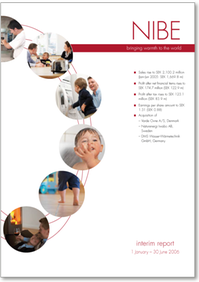